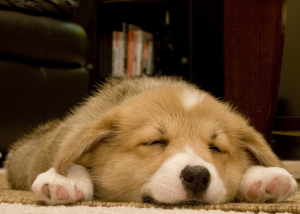 As mentioned before, GABA in the brain serves to inhibit another chemical which causes the brain to feel stimulated. As such, GABA and sleep are related because when there is a deficiency of GABA, the body will remain in an overexcited state. GABA regulates the amount of glutamate that is released in the brain, which reduces brain activity and soothes the mind.

Similar to those who suffer from severe insomnia, insufficient levels of GABA in the brain compounded with sleep disorders can lead one to depression, mood disorders, and feelings of anxiety. Sleep deficiencies and low levels of GABA cause fatigue and leads to drops in work performance. This ailment disturbs the length and efficiency of natural sleep cycles that energize the body.

During regular sleep, the brain experiences five to six sleep cycles which last approximately 100 minutes each. When beginning to fall asleep, GABA is secreted into the brain, allowing it to slowly shut down to rest as well as loosening the muscles into a relaxed state. If this process is affected or disturbed, sleep problems begin to occur and the later stages of the sleep cycle become less effective. During the delta – or deep sleep – part of the process, the muscles become paralyzed while heart rate slows down, which is why it is the most advantageous part of the cycle. Dreaming takes place during this part of the cycle.

One common disorder which affects millions of people worldwide is insomnia. Those who suffer from chronic insomnia are typically affected for well over a month. These victims may suffer from a chemical imbalance in their brain that prevents them from turning off their brain to ease themselves into a state of rest and deep sleep. Lack of sleep and GABA disturb how the brain enters the delta phase each night.

Common supplements and medicines that help people sleep are called tranquilizers or sedatives. These help people sleep by inducing GABA to be released in the brain which is beneficial in helping them sleep. They may also cause endorphins to be secreted and that further helps with relaxation. Endorphins are also chemicals in the brain, and their function is to provide a sense of comfort and state of well-being during activities like exercise and sex.

GABA levels in the brain can also be affected by some foods. Foods like oats, brown rice, and whole grains all contain the necessary amino acid that controls relaxation. Some other foods that will help the brain produce GABA are lentils, beef liver, broccoli, and citrus fruits. Whether you decide to change your diet or take supplements to attain relaxation, both methods can work to increase the amount of GABA in the brain and promote sleep.