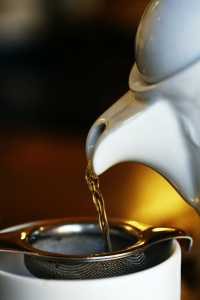 GABA tea was first discovered in Japan over 20 years ago by Japanese scientists. They were trying to figure out a more efficient way of preserving food. During their many experiments during this time, they tried to expose some tea leaves to nitrogen and they discovered that this improved the amount of GABA in the tea leaves.

Below are 5 important facts you should know about GABA tea:

1) GABA Tea is just as effective as GABA pills

Just because the source of GABA is different doesn’t mean GABA tea is any less effective than GABA pills. To recap what GABA does for you, GABA can decrease the amount of nerve cells that is firing in your brain. This help prevents your brain from being overstimulated and thus brings about a relaxing and calm feeling to your body.

There are also other benefits of calming down a hyperactive brain. GABA can help alleviate anxiety, stress, insomnia, feelings of depression, and even fight against epilepsy.

Also, taking GABA tea is just as effective because GABA is a molecule whether it is consumed in tea form or pill form. GABA is not any less effective just because it comes from a different source.

2) The amount of GABA tea needed is not fully known

It is difficult to gauge exactly how much GABA one needs to consume because of the different tolerances people have.

This is due to the biochemistry of certain individuals being different from others. This may be a good or bad thing depending for some – one person may need to drink more, and another will do just fine with a little GABA.

It is recommended to tweak the amounts of GABA tea you think you should drink to fully optimize its effects for yourself. And if you’re worried about side effects, GABA tea is a natural source of GABA which has no side effects (as opposed to synthetic GABA).

GABA tea is special – it is infused with trace amounts of GABA via the method explained in the beginning of this article.

But for clarification purposes, I will say it again: GABA tea are tea leaves that have been exposed to nitrogen which has been discovered to increase GABA levels in the tea leaves.

Therefore, tea that is marketed as GABA tea was specifically treated in an environment rich in nitrogen for the sole purpose of preparing it as GABA tea.

When drinking tea, there are likely more chemicals that are being consumed other than GABA such as the chemical L-Theanine.

L-Theanine is in most teas if not all of them. This ingredient is responsible for the relaxing and calm feeling one may feel after drinking tea.

L-Theanine is also available in supplement form, much like GABA is, and some stores may even sell them infused with GABA for a more potent calming effect.

Like natural GABA, L-Theanine is also incredibly safe, with humans having been consuming it for thousands of years whenever they drink tea.

When GABA is prepared in pill form, some companies may add their own proprietary ingredients into them which can make them more dangerous.

However, the way GABA tea is prepared through its simple process, it is less likely to contain any harmful ingredients and thus harmful effects.

GABA tea is composed of many natural ingredients and is therefore incredibly healthy and safe to consume.

GABA tea is highly recommended as an alternative to supplements. The GABA and L-Theanine that is present in GABA tea work in tandem to produce an extremely effective and lasting relaxing effect.

The negative to this is that the amount needed to achieve that effect varies between individuals, so it is up for each user to try to figure this out for themselves.

Also, if one already enjoys drinking tea, it would be a decision to make the switch from regular tea to GABA tea for more of a beneficial effect.

GABA tea Is great way of consuming GABA and receiving its calming effects and is also a great for tea lovers.
Photo Credit: *Evelina*

Article of interest: How to Produce More GABA Naturally