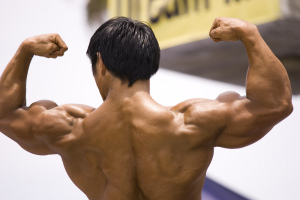 GABA is a primary component for brain metabolism and regulating muscle tone. There has been some research that show that there is a connection between the neurotransmitter GABA and HGH (human growth hormone). These studies show that there appears to be an increase in HGH in individuals that have been stimulated by GABA. Studies have shown slight increases in HGH when GABA is taken orally or injected, however there will need to be more experiments to have a definite conclusion. In spite of all this, many bodybuilders as well as those who desire higher levels of HGH in their system accept the positive results found in the studies that link HGH levels and GABA. They typically use GABA as an injection or take oral dietary supplements.

How Does HGH Work with GABA?

HGH is an important hormone that is secreted from the pituitary gland located in the brain that results in the growth of muscle and bone. Children and teenagers release large amounts of HGH to help them grow as they mature through puberty to become adults. High HGH levels can also be attained outside of this through a natural response from rigorous exercise as well as slow wave sleep. Some research indicates that GABA can be ingested orally or in an injectable form which will benefit in improving the levels of HGH, thus further enhancing its effects.

Since GABA by nature has an effect on the pituitary gland (the primary gland that releases human growth hormone) the connection is made that HGH and GABA are linked. In spite of this being technically true to an extent, injectable or sublingual GABA can be used in ways much different from GABA that naturally occurs, and may have different outcomes on the pituitary glands. A study suggests that, based on the physiology of an individual, injectable GABA can limit or promote the levels of HGH released by the pituitary glands, meaning there is an element of risk involved, however that is the case with many drugs. Another study suggests that taking GABA orally can increase both levels of HGH and GABA, however it may not work for all.

As a result of studies which suggest that there is a link between GABA and HGH having an effect on the pituitary gland, it is possible for an individual to increase HGH in their body with GABA. As another option, an individual can pick a supplement that contains other amino acids like ornithine or arginine, which are also viable supplements that can assist with increasing growth hormone levels. Keep in mind that intense exercise and deep sleep can be beneficial in increasing growth hormone levels in individuals. On a final note, reducing or altogether eliminating refined carbohydrates and sugar can help HGH secret properly.

Article of interest: GABA for Insomnia